Fischinger on DVD! 2 DVDs from CVM

Order the first Fischinger DVD through our Squarespace Store, details below

Released May 2006. Order below

Decades before computer graphics, before music videos, even before "Fantasia" (the 1940 version), there were the abstract animated films of Oskar Fischinger (1900-1967), master of "absolute" or nonobjective filmmaking. He was cinema's Kandinsky, an animator who, beginning in the 1920's in Germany, created exquisite "visual music" using geometric patterns and shapes choreographed tightly to classical music and jazz. (John Canemaker, New York Times)

Oskar Fischinger is one of the greatest artists of the 20th century, embracing the abstraction that became the major art movement of that century, and exploring the new technology of the cinema to open abstract painting into a new Visual Music that performs in liquid time. (Biographer William Moritz) 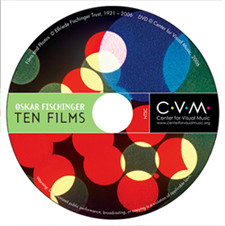 Licensed for private home use only, all other rights reserved

Private home use Orders - US$30

Order here through our Squarespace store

For private home use only, no screenings or use online permitted

Order through our Squarespace store

Limited educational license allows for screenings in classrooms and library/research collection use only. Public Performance Rights are not included (screenings for public or paid audiences, and exhibition in museums and galleries are not permitted under this license, other uses require additional permissions and licenses).

To order via mail, inquire to CVMaccess at gmail.com. NOTE: Shipping rates have increased, foreign orders will be charged $14.00 shipping. CA tax is currently 9.75%.

Other places to find the DVD:

In New York, the DVD is sometimes available at the bookshop of The Whitney Museum.

Email us at cvmaccess (at) gmail.com