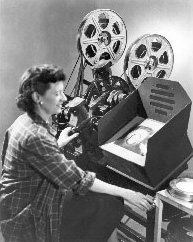 Selected Statements by Bute About her Films

CVM is the authorized distributor of Bute's abstract films, having received distribution rights from Starr, plus her Bute 16mm film and video collection

A pioneer of visual music and electronic art, Mary Ellen Bute produced over a dozen short abstract animations between the 1930s to the 1950s. Set to classical music by the likes of Bach, Saint-Saens or Shostakovich, and filled with colorful forms, elegant design and sprightly, dance-like-rhythms, Bute's filmmaking is at once formally rigorous and energetically high-spirited, like a marriage of high modernism and Merrie Melodies. In the late 1940s, Lewis Jacobs observed that Bute's films were "composed upon mathematical formulae depicting in ever-changing lights and shadows, growing lines and forms, deepening colors and tones, the tumbling, racing impressions evoked by the musical accompaniment." Bute herself wrote that she sought to "bring to the eyes a combination of visual forms unfolding along with the thematic development and rhythmic cadences of music." (Ed Halter)

Three Bute films are included on CVM's Visual Music 1947-1986 from CVM Archive DVD (2017 release): Polka Graph, Color Rhapsodie and Abstronic. For private home use and classroom use, not for screenings.

Please visit this page for info on the Bute Retrospective film program, or to rent other Bute films (16mm or digital)

Two Bute films (Abstronic and CVM's new 2K restoration of Tarantella) plus archival material from the CVM Collection, are included in the Women in Abstraction exhibition at Guggenheim, Bilbao. Through February 27.

Two Bute films (Abstronic and a new 2K transfer of Tarantella) plus archival material from the CVM Collection, were included in the Women in Abstraction exhibition at Centre Pompidou, Paris. Closed August 2021. CVM thanks Brad and Mary Glanden for their support for the digitization of Tarantella.

Three Bute films were installed in the Soundmuseum exhibition at D Museum, Seoul, Korea. A special visual music section from CVM included 12 films by Bute, Fischinger and others (digital display). May 19, through December 27, 2020.

One Bute film will be included in ZKM's Art in Motion exhibition in Beijing (postponed, news tba).

Reent screenings and exhibition, 2019 and earlier

Two Bute films were included in the Art in Motion exhibition at ZKM, Karlsruhe, Germany. July 2018 through February 2019 (digital display)

Past Retrospective programs and other screenings

March 2005 - Museum of Contemporary Art, Los Angeles. An Evening of Visual Music Films curated by CVM, Presented by CVM and MOCA. Revelatory moments from the history of visual music, an exploration into the true lives of the kinetochromatic scientists, and a breathtaking leap into the now-and-beyond of an art form passionately devoted to purified sound and light. This event includes film and video by Fischinger, Belson, Bute, Brakhage, McLaren, Dwinnell Grant, Dockum, Neubauer, Baily, Ellis, and others. (More about this show) 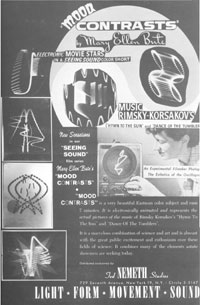 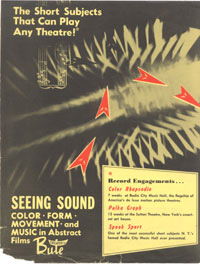 Promotional Flyers produced by Ted Nemeth Studios. From the Collection, and courtesy of Center for Visual Music.