Images from Music of the Spheres artwork, 1977 (c) Jordan Belson

Several films including Fountain of Dreams (film still below) and Allures were included in a group exhibition, Soundmuseum at Daelim's D Museum, Seoul. May-December, 2020. Part of a special CVM Visual Music section with 11 films, including films by Fischinger and Bute.

Fall - Music of the Spheres was on view in The Botanical Mind exhibition, at Camden Arts Centre, London. An accompanying online exhibition is here.. See the As Within section.

December - 2 Belson films from CVM, including a 16mm preservation print of Allures plus Samadhi (digital), screened at Spoutnik Cinema, Geneva. Accompanying the exhibition "By repetition" at Bâtiment d’art contemporain.

February - May, 2017 - Allures was part of the Hippie Modernism exhibition at Berkeley Art Museum. Digital, looped in a small room downstairs with other films.

September - December, 2016 - Belson's Samadhi plus some artwork were a part of the São Paulo Bienal, Brazil.

May 9 - Music of the Spheres (original long version), Chakra and LSD, in new preserved 16mm prints, screened at the International Short Film Festival, Oberhausen, Germany (with Fischinger, Cage and other films) in the Archives section, a Center for Visual Music presentation.

Four of Belson's pastels were in an exhibition in New York at 80WSE Gallery, in Language of the Birds: Occult and Art, through February 13, 2016.

CVM received a grant to preserve Mandala. Thanks to the National Film Preservation Foundation.

CVM is pleased to announce an original advertising poster from Vortex V (1959) has been donated to CVM for fundraising purposes. We thank the Estate of Jordan Belson for this generous donation. Proceeds will benefit the Belson preservation and digitization project at CVM. A rare original advertising poster (1959) from Jordan Belson and Henry Jacobs' experimental concert series at Morrison Planetarium, San Francisco. 11 x 28 inches, on posterboard heavy stock. Light wear left side, some light staining upper left. An extremely rare item from the legendary events. Vortex original items rarely enter the market. Inquire.

New HD transfers and preservation projects are underway; please consider helping to digitize Belson's work. Donate via paypal to cvmarchive (at) gmail.com. Donations from this project have helped us transfer films and put a few clips online on our vimeo channel (thanks to previous donors, see below for names).

Many more films need preservation and digitization (examples above and at top of page, from just a few films needing digitization), please Donate via paypal (all amounts help), call us with your credit card #, or contact us if you'd like to sponsor a film or help us put more clips online. It is very difficult now to obtain grants to assist with digitizing the 16mm originals, particularly the experiments and unreleased films.

Donate via paypal to cvmarchive (at) gmail (dot) com

Music of the Spheres (excerpt) from CVM on Vimeo.

Chakra and Allures in a program at Barbican Centre, London, curated by CVM director Cindy Keefer for Barbican

The never-released film LSD (c. 1962) screened at MoMA New York in November 2014, as part of their annual Festival of Preservation. Presented by CVM with several other films from CVM's archive (Oskar Fischinger, John Cage).

Belson films from CVM screen in the Jerusalem and Tel Aviv Film Festivals in August; and at BFI Southbank, London in November in Jet-Propelled Cinema: How Psychedelia Infected Hollywood Sci-Fi

Fall 2012 dates for screenings of the Retrospective program in New York, Boston, Toronto and other cities, details here.

CVM received a preservation grant for the film LSD, and several reels of Belson's experiments, some from the Vortex Concerts c. 1959.

JANUARY 2012 NEWS: Belson's film Allures (1961) was been added to the National Film Registry List (Library of Congress), for films deemed to be "culturally, historically or aesthetically" significant.

2011 PREVIOUS NEWS:Filmmaker/artist Jordan Belson died peacefully early Tuesday morning, September 6, 2011 at his home in San Francisco, of heart failure. He was 85. In lieu of flowers, Belson's long-time partner Catherine Heinrich requested that donations be made to Center for Visual Music's preservation and digitization work to continue preserving the legacy of Jordan Belson. A Memorial screening occured October 19 at Pacific Film Archive, Berkeley, of CVM's Program Jordan Belson: Films Sacred and Profane, which included an unreleased film by Belson called Quartet. CVM is planning Tribute Retrospective screenings for other cities and festivals through 2012. Details to follow as confirmed, see Screenings special page or visit CVM's screenings and events page.

Before his death, Belson signed a statement asking people not to put his films online, as low res copies do not do justice to his work. However, we have permission to put a few short high resolution excerpts online - we're raising money now to transfer and digitize from the originals and preservation masters. Help us put a few high quality clips online from World and other films. (Image from World). Contact cvmarchive (at) gmail (dot) com, or Donate via paypal to cvmarchive (at) gmail (dot) com. Our address and phone # are at bottom of page.

Please see the Belson bios below. We've posted obits and news items on his death, at the bottom of the Belson Bibliography page. 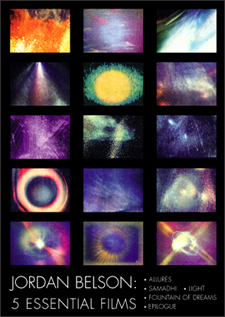 About the Films on the DVD

Curated by Jordan Belson. Produced by Center for Visual Music

BACK TO CVM HOME PAGE

Why are there watermarks on all of the images now? Abuse by disrepectful persons, and a company that uses our images and text without credit (please stop, mubi).