Our store has moved to squarespace, please vistit us here 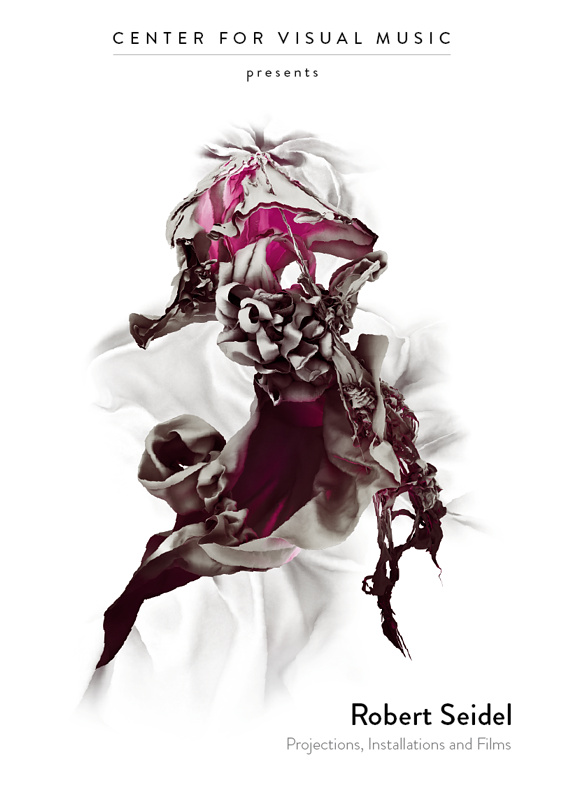 Seidel, who studied at the Bauhaus University Weimar, creates video installations, media façades and experimental films. Seidel pushes the boundaries of abstraction to the sublime and organic through his approaches drawn from scientific visual analysis and digital extensions of painting and sculpture. The DVD collects his major films, videos and documentation from his projections and installations from 2001 to 2014. Bonus Feature: Exclusive interview. Seidel’s work “is an immersive experience, a sensuous dip into light, color, movement, sound and change” - Los Angeles Times. A CVM release. Produced by Center for Visual Music and Studio Robert Seidel (Berlin). PAL DVD, all regions, Item V116.

Private home use only, $20   (no public exhibition or screenings permitted)

Richard "doc" Baily and John Buchanan. xtacism, aura: experiments in spore. Includes xtacism (2005) and aura (2007), plus Baily's Cal Arts film Night Waves (1977). aura was finished posthumously according to Baily's plans with John Buchanan. $25 private home use, $100 institutions. Additional fees for public installations/exhibitions, please inquire. SPORE is a "software/aesthetic development project that has grown out of a proprietary ultra high-soeed particle renderer" (Richard Baily). Baily developed SPORE in the early 2000's, using it for his work on Solaris and other feature films. Bonus, Baily's 1977 film Night Waves, made at California Institute of the Arts where Jules Engel was his mentor. Night Waves resulted in Baily's job at Abel & Associates. NTSC, region free. A Center for Visual Music Release, 2014.

About xtacism: "there is no middle, beginning, end, it is like a river, it just keeps on going." (Richard Baily)

Clip from aura on vimeo.com

Clip from Night Waves on vimeo.com

Private home use only, $25   (no public exhibition or screenings permitted)

Jeff Scher, A Year in the Animated Life. $20 individuals, $100 institutions. Order through our Animation page.

Richard Reeves : a compilation of cameraless animation-films. NTSC DVD. Includes Linear Dreams, Garbanzo, Zig Zag, Sea Song, 1:1, Element of Light. 30 minutes of animations plus extras including a slide show, a rare animatic,  an insert describing what the films are about and how they were made. NTSC, Region 0. $20 private home use, $100 institutions.

$20 temporarily out of stock

vE - jA : Book with DVD. Eskander, Xarene, Ed. vE-jA is a global snapshot of an exploding genre of tech-art performance: VJing and live audio-video. Includes DVD with clips. The book covers 40 international artists with 400+ colour images and 50+ movies and clips on an accompanying DVD and web downloads. Regionally organized, the book showcases VJing and live A/V not as an isolated art phenomenon for geeks, but as a global art movement with sophisticated creators and audiences alike. The organization of the book in this manner has lead to discoveries of the differences and similarities in the devlopment of the art including the influence of specific urban styles, political and social states, cultural influences, as well as hardware and software development and influences in specific regions. Introductory essay by Marius Watz brings forth the role of synchronicity of audio and video technology in cinematic performances; Barry Munsterteiger, lead producer of Apple video software, focuses on the role of art in the evolution of technology; Grant Davis (VJ Culture) provides supportive information on VJ specific hardware and software. Essays by contributing artists cover local cultural aspects influencing VJ scenes globally and provide insight on the inflluences and productivity of cities such as London, Helsinki, Barcelona, Tokyo and general scenes of US, Austria, France, Netherlands and Australia. 2006 publication, BACK IN STOCK - book only without DVD is $25

Video Out: The Story of VJ'ing and Live Video Art. DVD, NTSC.

University/Institutional inquiries - contact us at cvmaccess (at) gmail (dot) com. NOTE: Institutional rates listed do not include public performance rights, only classroom and library use are permitted. Museum exhibitions do NOT fall under these categories; usage in museum or gallery exhibitions is not permitted for any of the dvds or videos sold by CVM. Please inquire for information on additional permissions and fees for these public exhibition requests.

Prices listed do not include shipping. Please order via our spacespace store (link at top) or contact us

PLEASE NOTE: We cannot accept returns unless product is defective.

For additional information, please contact our Store at CVMaccess (at) gmail (dot) com